Canning season starts this week, alert the media!  My lists are made and equipment has been hauled out of the basement and it means summer is in full swing.  And what a summer it's been!  This summer has driven me back to the studio as the heat and drought have been all but unbearable.  The gardens look tired and not well tended.  The veg gardens are plugging along and here is the latest update.


english cucumbers are having a very good year! 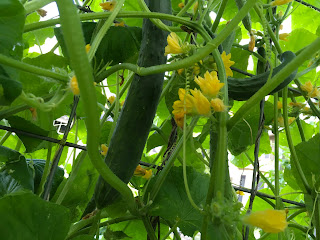 Beans are slow but finally producing.
Bean beetles have found the beans again.
Daily picking has commenced!  For the love of morning rituals. 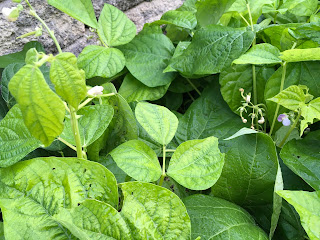 The basil has finally recovered and it looks to be a
banner pesto season! 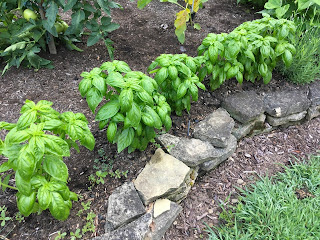 These little cucumbers I started in the studio back when the snow was flying are a winner.
Spacemaster 80 is the variety and I will grow these again. 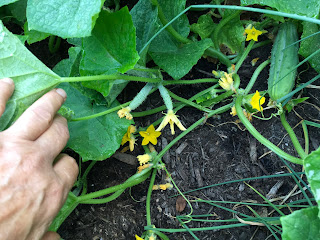 The bell peppers have wilt.  This is as bad as I have seen it.
I did not start these, I bought these plants from a local green house.
This has spurred me on to start many more plants next garden season.
Plants are expensive, seeds not so much and if you're a seed saver, free! 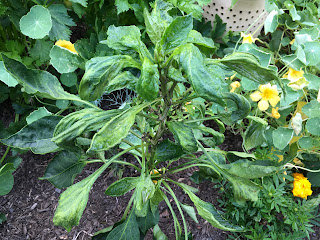 Celery is having a great year.  The peppers plants behind the celery is a variety called: Yolo Wonder Peppers.  A sweet pepper from Texas. (started last March in the studio)  As our summer has been hotter than ever they are thriving and probably think they're in Texas!  They started out in terrible shape, I almost yanked them and tossed these in the compost pile but wow have they recovered.  Lesson learned this year:  Plant for heat, drought, cold, wet, and everything in between.  We just don't know what the weather will be like anymore.  Why go to Vegas when you can garden? 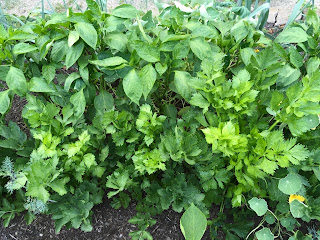 Onions, banner year!  I grew two varieties (not from seed)  I grew a cooking and storage onion and an onion called "Stuttgart".  What a winner that is! Crisp, mild, great in pickles, round and flat, slow to bolt and just all around delicious. 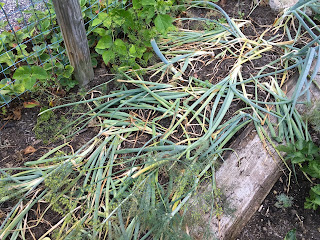 Ancho Peppers and Jalepenos are enjoying the heat as well. 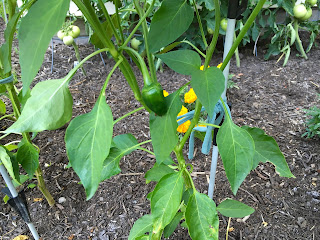 The back garden looks tired, very tired.  I have started digging potatoes for meals.  They have done well.  Almost everything in this garden except the beets have bolted.  The lettuce did very well.  Kale has done well too.  Beans are coming along, very slowly.  Japanese beetles have found the raspberry bushes along with the local herd of robins.  If I walk out in the very early morning (6 am) I can get a handful of berries for my oatmeal.  Peas were good too.  Kohlrabi, spinach, lettuce, radishes etc bolted in the early heat; carrots did not like the heat and have ended up wormy and tough.  This garden will be pulled and planted for Fall and we will try again.  Eventually I will put a hoop house over the entire bed and try to grow greens this winter. 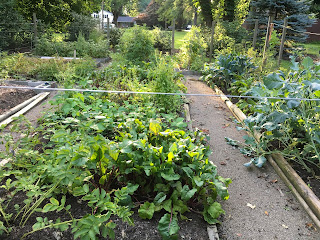 All in all it has been the year of assault and war.  The groundhogs have shown up; eaten all the seed heads off the lettuce and kale.  To add insult to injury, tunneled behind the rain barrels.  Also using the front porch as les lavabos or a crapper, it just sounds better in french.
The raccoons have invaded the chicken coop and using the front walkway as les lavabos also.   Welcome to Miller re-location services! 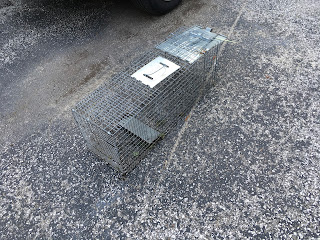 The chickens have become escape artists.   I was in love with my first flock of chickens almost 6 years ago.  These girls are chickens and jerks.  I like them a lot but they have tested my patience to the point of thinking chicken soup might not be far off.   I managed to keep the deer off the hostas and then the chickens decided to fly the coop, regularly, no matter how much chicken wire I tacked up and ate the hostas and the ferns and squash and the lettuce.  I just googled how to clip their wings, happening later today.  I have one ring leader, a Rhode Island Red who is getting clipped first!  I predict there will be unhappy girls but I will pull up a lawn chair, pour a Guinness and see if they hover craft themselves out of the run.  Or maybe they are just magic chickens!  In which case I will pull out my electric wand and yell: STOOPIFY!   WWMWD or what would Mrs Weasly do. 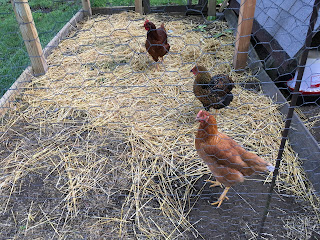 Edible landscaping.....
This is the front of my house.  The new bed, installed in March.  Keeping this alive has been interesting.  In this bed I can harvest; lemon balm, sage, lavender, a lapin cherry tree (the deer and japanese beetles love 😕 ) and a moon and stars watermelon vine. 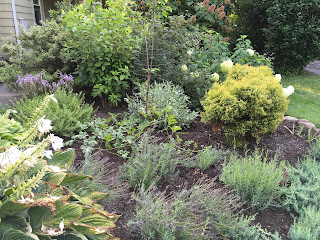 The front walkway is lined with alyssum, victorian salvia, teucrium chamaedrys and basil. 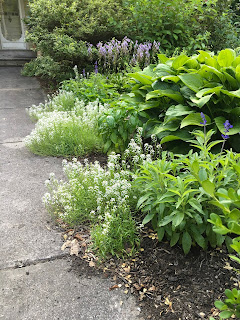 and dahlias, the bulbs are edible! 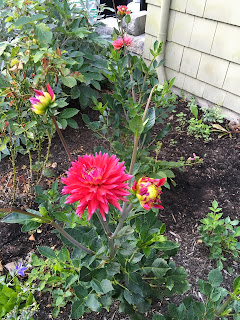 I am still finding clean up from the last storm as we prepare for the next storm, due tomorrow afternoon. 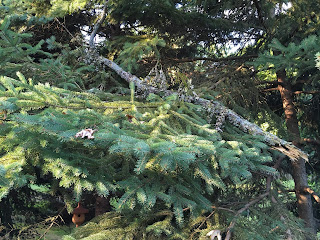 I pruned the oakleaf hydrangea early but only took a 1/3 of the growth out.
It recovered and looks great!  Those pink panicles tells me the days are winding down. 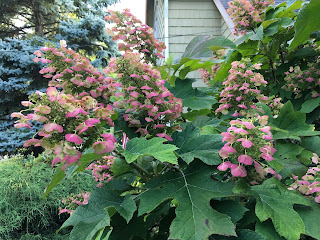 Hard to tell from this photo but I cut half of this annebelle hydrangea 3 times last Spring.  Annabelles are big floppy bushes and by the end of July are flopping all over the other plants.  The half I did not cut back is flopping and laying down on the job.  The half I cut three times, is standing erect.  Not as many blooms but it's upright!  So next year maybe two cuts.  It does solve a problem.  Fewer blooms are attractive and give the eye a bit of a rest as it pans through the garden. 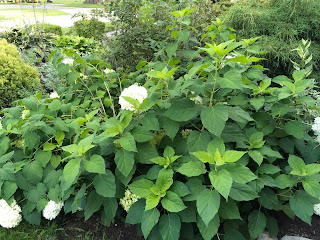 2020 is has just been a slog and bit of a battle.  From websites and selling pots to gardening and house renovation.

Our very close call with Covid.

Our basement stairs are in need of repair and as I run up and down those stairs a couple times a day I thought it was a good idea to rip them out and rebuild them.  The electrician said he would not come back until the steps were repaired.  Ok, got it!  I pulled a couple boards and realized this was structural work and maybe beyond my skill set and youtube.  I called a contractor.  He arrived and was great.  We were masked and gloved as was he.  We hired him, we did not shake hands.  He said he could start in about two weeks.  Great!  Last Thursday we got a text that he had tested positive for Covid.  Shit!  We had been in the very small basement huddled around beams and pipes surveying a dicey situation.  It had been 7 days since we had contact.  We self accessed and we felt fine, we felt good.  We thought we should go get tested to be safe.  Call around and no tests are available.  We would need to travel 30- 40 miles to get a test and then wait 6-10 days.  Called urgent care and a lovely woman talked me off the ledge.  Self quarantine for 7 more days and see how you feel.   We are finishing up our self imposed quarantine and we are fine.  But too close for comfort!  I have been so careful.  Only one other person has been in my house since March!

So now that I have first hand experience with testing or no testing, I really wonder how in the world can schools open in a few weeks?  Things to ponder in the kitchen during canning season and the garden. 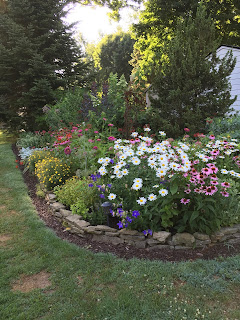