Just before I left for Chicago (the end of August) I got a call from;
Fieldstone Farm Therapeutic Riding Center.  http://fieldstonefarmtrc.com/

People who do wonderful & amazing things with horses and people with -abilities, not disabilities.

Their all time favorite horse had passed away and they really wanted horsehair pendants made from
the tail of the best horse ever;  Princeton.
My old friend George Roby gave them my name.  I immediately did the evil eye on George.
George is known around these parts as;  Have raku kiln, will travel and demonstrate at the drop of a hat.  George is a pretty smart cookie and I wondered why he didn't want to do this, hmmmmm.....  possible red flag.

But then they called, I listened and there are some things one just shouldn't say no too.  Explaining I was
off to Chicago and I would get around to the pendants when I got home.

Chicago came and went and was spectacular.  Two days after returning from Chicago & fired up to do..... REAL ART!
I opened my mail and a check fell out with an order for 150 soup bowls for a Peace Corp fundraiser.  $5 a bowl, what to do..... .  I was still high on selling $600 pots in Chicago.  With skid marks on my forehead I dug in.
Soups of the World was the first week of November.  Thinking I would crank the bowls out first, after all I am a professional it shouldn't take more than a couple weeks.......
6 weeks later Murphy's law was in full swing, kiln repairs, glaze disasters (these cycles do happen from time to time in the studio but I never pencil it in.) etc I was so happy to see that project done & delivered and I was toast!  The bowl money just covered repairs and expenses but it was a such a great project.  Just keep moving as galleries were calling with orders, one more show to do and then I could get back to REAL ART.  I made an emergency 24 hour run to SOFA in Chicago on the Navy Pier to recharge my creative battery.  I was pumped!  In the back of my mind the pendants loomed large......... and just when I needed a real push to get going on the pendants 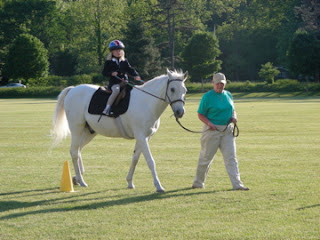 Needless to say I kicked myself in the pants and gave myself a stern talking to!  They need 50 pendants, but wait I just vowed I was only going to one of a kind works of art from now on....  50 of the same thing?
I called and we talked and you could hear the out pouring of love for this horse and then another picture came in and this one really poured gas on my procrastinating fire......... 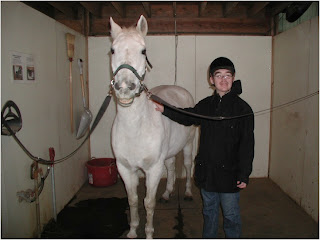 Princeton is smiling!  Not too mention the rider!
And so it began.......
I had not fired up my raku kilns in the last four years as I had clearly gone onto to glaze testing, new forms, shows, life, kids, house remodeling and on and on.....  buck up and get to it!
Oh George Roby where are you???? 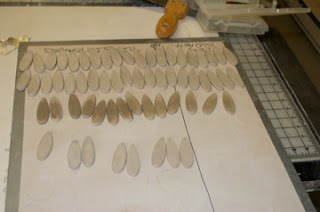 Clay was rolled out, cut out, burnished, polished with a thin plastic bag and set off to dry.
After a day they were bisque fired to 1891 F.  Two days for the kiln to cool and I prayed the weather would hold so I could get these fired!
After several days of rain, Saturday morning Mother Nature gave us a window.  I unwrapped the kilns, dragged out the propane tanks, burners, gloves, extra brick, lids and started to clean out all the animal nests;  relocating several toads and spiders so I could commence firing. 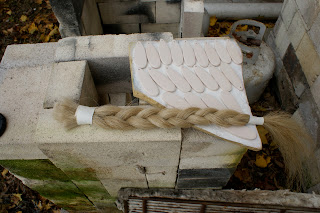 The first pendants were ready to go into the kiln. 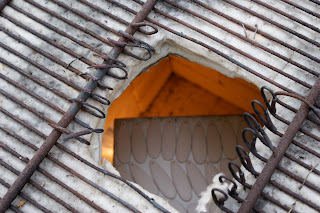 The burners were lit and pendants were slowly fired to 1100 F. 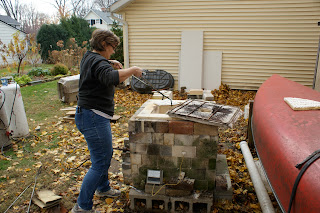 At 1100 F. the pendants are removed from the kiln. 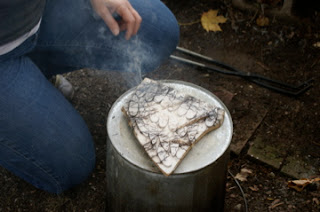 Very quickly, strand by strand Princeton's tail hair is carbonized onto the pendants. 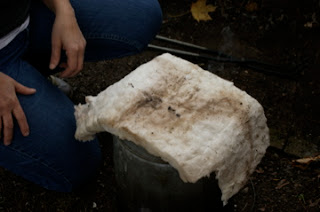 A piece of ceramic fiber covers the pendants so they can cool very slowly and not crack.
All 65 pendants made it through the firing, not one cracked!  Yes, I made extra, just in case!
After they cooled they were washed and dried.  After completely dry they were give three coats of carnuba wax, buffing well after each application.
The more I buffed the more excited I became....... they really were beautiful.
Sometimes the things I so clearly see in my mind do not always make it to three dimensional perfection but I am happy to say these looked exactly as I had hoped. 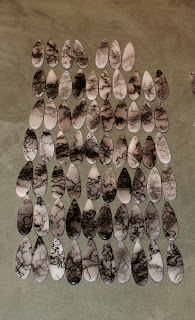 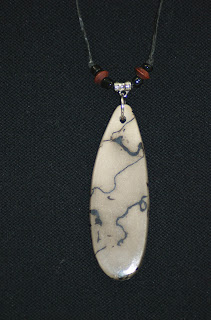 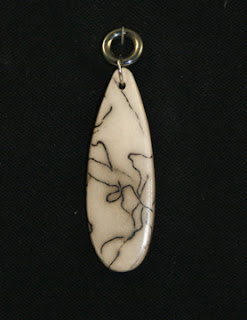 I love the idea of a pendant.  Something to wear close to the heart, just like the horse who touched so many over his many years of service at the riding center.
It was such an honor to be part of this project.