Winter is slogging on around here. 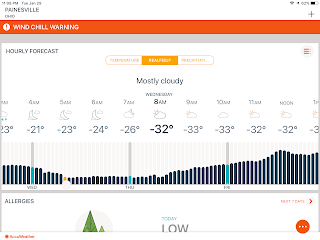 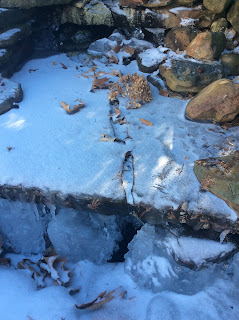 Then it thawed, seemingly overnight and the flooding began. 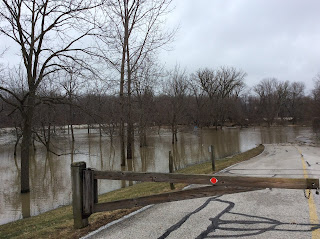 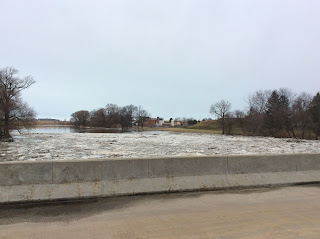 then the Hungarian pigs showed up.... 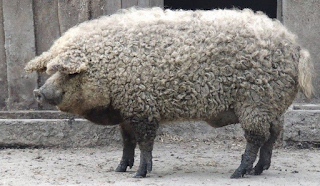 With all the weird weather afoot I retreated to the safety of the kitchen.
Remember all those beans I canned a few months back.  Garbanzo beans were in the mix.
I have been reading about this stuff called, aquafaba and just could not figure out how it worked.  The gunk from the canned beans, which is quite thick if you can your own beans, is magical stuff and a substitute for egg whites.  How can that be?
Without getting into aquafaba crazy land, here is link that will explain everything you ever wanted to know about bean gunk or that stuff you have been throwing down the drain for years.  http://aquafaba.com/

I began with the drainings of one jar of bean gunk that I added; 1/4 tsp cream of tartar,  4 Tbsp sugar. 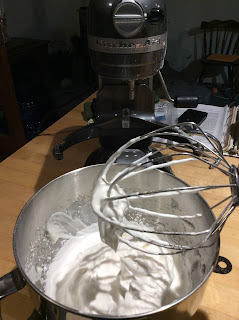 Pretty amazing, right?  and just like egg whites, you can hold it upside down over your head!
or make meringues..... 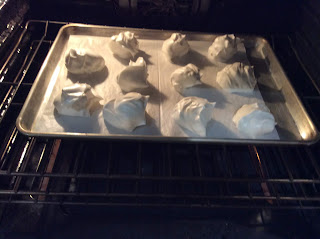 Topped these with bourbon peaches and cherries and I think I heard angels singing. 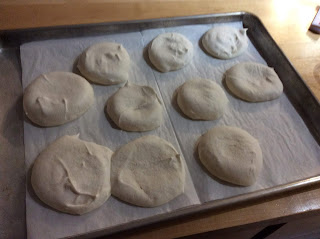 My meringues deflated a bit during baking because I didn't add enough sugar.  So next time I will add more sugar until I find the right balance.  I had so much fun playing with this bean gunk I had garbanzo beans coming out my ears so I made salad!  Lots of salad.  I am gonna need another stomach to digest all this fiber.  February is such a great time to test all the plumbing, in all my houses. 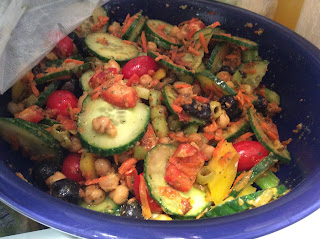 Butch had been accompanying me to the grocery store because it's winter.  I have to say it's like shopping with kids!  I get to the checkout belt and see unidentified things going down the belt and wonder how did those get in the cart?  He can't seem to say no to fruit.  He picked up two pints of blueberries, along with peanut butter stuffed pretzel bites, oyster crackers, canned clam chowder, dark chocolate candy bars because you know dark chocolate is good for your heart, a can of Pringles and maple flavored pepper.  I got home and said:  you do know there are 30 pounds of organic blueberries I picked last summer in the freezer.  He held up the pint of blueberries and said; But look at these!  They're HUGE!  I said: where are they from?  The plastic box says USA.  Look again.  Packaged in the USA, product of Peru.  Is Peru organic? he asked.  Who knows?  But they really were HUGE and I became suspicious.  We washed a few and tasted a delicious HUGE cardboard blueberry.  They went onto the top shelf of the fridge and sat there for a week.  And they never changed either.  They didn't wilt, wither or mold or anything; they just sat there.  But they were expensive and it kills me to toss stuff so I made a blueberry peach pie.  My canned peaches help immensely to add a bit of flavor to the pie. Yes and that is a lard crust; grass fed, happy pig lard because it's good for your heart!  And there is a bit of gingerbread biscotti too. 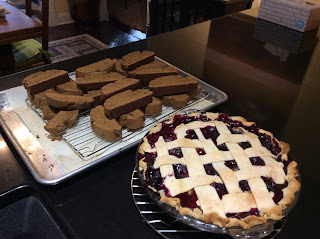 He also can't stop buying bananas.  I finally said; Stop it!  I can't bake one more loaf of banana bread but I did because I could not toss three really ripe bananas.   The freezer is filling with a various assortment of banana breads.  I have also started shopping alone! 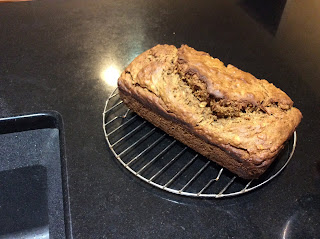 When I finally exited the kitchen I started a new project.  I did this one for my kids, who are scattered to Colorado and Alaska.  I keep them up to speed on my kitchen adventures from time to time but as I am growing older I am having an alarming number of food memories.  Never thought too much about it but the Aquafaba meringues triggered a memory of these cookies called anise drops from Grandma Ptak.  As kid I thought these were a disgusting cookie.  They were hard enough to bounce off the floor and I wasn't crazy about the taste either.  But today I do like the flavor of anise and thought it would fun to try them again.  I inherited my Mom's recipe box, filled with treats from the 50's and started hunting. 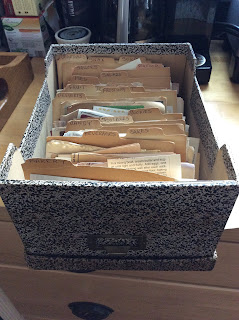 No anise drops, so guessing Mom wasn't crazy about them either.  However I did start laughing when I went through the beverage section.  Clearly this is how my Mom got through the 50's, 60's and most of the 70's.  And I do remember tubs of "Slushy" in the freezer with a skull and cross bones drawn on the top of every tub.  To keep the kids out I guess?  I never did taste the stuff although now seeing this recipe wish I had! 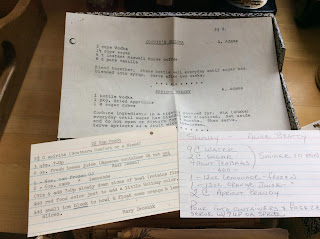 I gave up and started surfing the internet and there on the King Arthur Flour site I found what I had been looking for:  Anise Drops!  They looked exactly like what I remembered so I made them.   They make that little meringue cap when you bake them.  They are softer than I remember too but I baked them an extra 7 minutes to dry them out and there they were!  I put them in my cookie crock and left them there for now going on two weeks and the longer they sit the better they get.  I have one or two with a cup of tea at night.  I love these cookies! 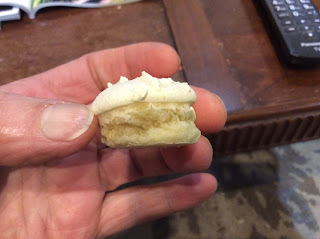 All this hunting around for recipes got me wondering if my kids will have any food memories?  I have pondered putting all these crumbs together for years and I finally sat down and put a book together.  This was a mind numbing experience.  I have a terrible time reading and thank the library gods for audio books or I would be completely illiterate.  If anybody had any idea how long it takes me write a blog post they would just shake their head and ask why?  I think it's to keep in touch with my kids.  If the first kid had never shipped off to Peace Corp Africa I would have never ever started writing anything!  There was no phone service and a letter could take 6 months to get to Guinagourou, just to the right Parakou.  But a blog post, she could read if and when she got to base camp.

So on a cold January day while I was blowing my nose and taking another couple aspirin I downloaded the software from Blurb.  It is software that was the easiest for me and there were no page limits.  I used their bookwright software program (free).  I watched a bunch of YouTube videos and yup, I think I can do this.  Here is the link to their website: BLURB.com 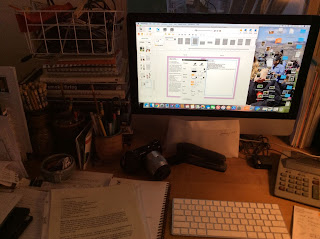 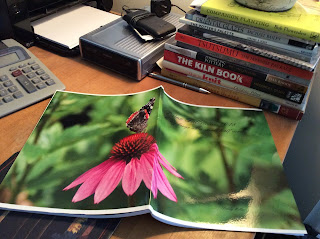 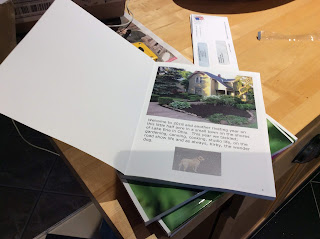 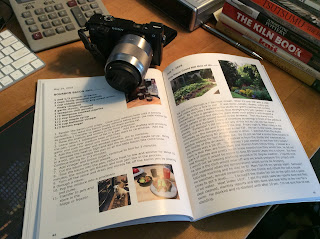 The book arrived just as Butch was pulling out of the driveway for his annual vacation to Florida.  I am banned from the state of Florida;  Kirby and I will be having a lovely candlelight dinner for Valentine's Day.  I tucked the book into his reading pile and said; READ THIS while you're on the beach.  He never reads the blog and is quite mystified at how I stay on the compound with little outside contact.  He asked repeatedly if I would be OK?  As he pulled out of the driveway in blizzard this morning I sipped my coffee and waved.  Then I closed the door and ran around accessing house projects to do in 7 days, without interruption!  Oh just color me giddy with excitement!

In reality I need to get pots made for a show coming up fast!  And show entries are piling up too.  The house projects won't be too big but I am not going to make the bed for a week! 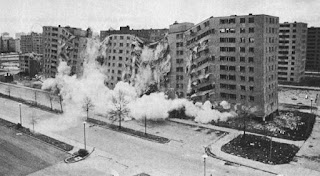 As I batten down the hatches for yet another winter storm and watch Rufus scurry through the backyard looking for shelter. 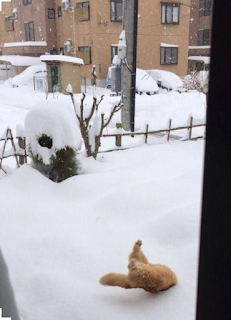 (not really Rufus but could be!)

A news reporter blares the latest tweet from He Who Shall Not Be Named:
"What climate change, we could use a little global warming" I am just shaking my head and wondering whatever happened to that thing called; SCIENCE?  Can we please fund a scientific board who will sit in the White House and every time "faux facts" come out of the White House and/or the  merry band of idiots; the Science Board could press a little red button, filling the podium or microphone with a shot of carbon or methane gas, just to make them stop talking!  or maybe just slowly start filling the room with enough polar ice water so their polished leather shoes are squishy.

Mentally speaking I have gone down the very dark hole of; Wake the Fuck Humans!  I have just about withdrawn from Facebook, the world news, the local news, all politics in general and yet is seeps through the cracks of my day to day life.  I don't seem to have enough putty to fill the cracks anymore.
During the government shut down, I watched somewhat intelligent people, in somewhat fancy new cars pulling up to food banks, declaring they just didn't know what they were going to do.  I watched a Mom talk about giving plasma for food money while the pay checks stopped.  I was in utter disbelief at some of these stories.  When pasta is 10 bags for $10 buy it and store it away.  Bank accounts are empty, food shelves are empty, the White House is empty.  I can't watch anymore so I kept busy in the studio, kitchen and my desk and just wonder what would the Grandmothers do?
- February 13, 2019 No comments: