Not sure I have anything to blame this on except two full moons in March, a blue moon, mercury hit my garage, Kirby gave me the stink eye, post Olympic depression, Chaos rising?

"Hey, I'm sitting in a random parking lot waiting for a guy named Brian to show up with his ex-wife's brand spank'n new Kitchen Aid food processor.  If your Dad texts looking for me just tell him I'm on a secret mission.  I have my blind attack dog, so no worries ..... oh and I'm sitting under a street light."

The down hill slide started early last week when two show applications showed up as "rejected".
I read it 10 or maybe 20 times because my master plan was; close the gallery, buy a van, trick it out for shows and turn the radio up on the headbangers ball channel while making a shit ton of pots.  So now I have a van and no shows..... kind of gobsmacked by this shift in the paradigm of my business plan; still got the headbangers ball channel on loud though.

Then I realized I had all this time on my hands and I really didn't need to go to the studio and what does every body in a state of panic do.... stock the pantry Ethel!!  We're not gonna starve! 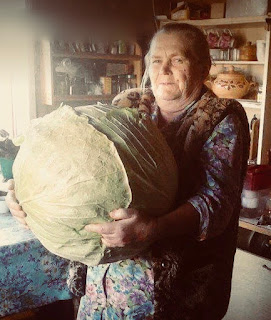 I started cooking down those chickens in the freezer and made 20 quarts of stock!
So those chickens paid off in spades!  9 chickens produced 20 quarts of stock, endless piles of eggs for three years, compost I'm still spreading, a liter of golden schmaltz and hours of entertainment.
The chickens kind of paid for themselves as the eggs were sold for $3 a dozen.  Oh and did I mention they also work as a garbage disposal and bug eradicator.  And helped Rufus, the neighborhood badass cat, kill countless voles and moles around the garden.  So the chickens are clearly winning...... no wait they are in the pot, maybe not so much for them. 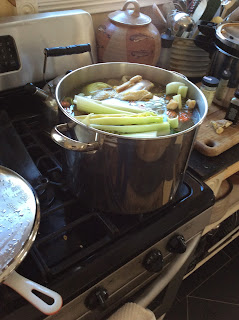 and then I made pasta in the food processor......
I have had a Cuisinart for 30 years; gone through two now.  The motors are fine but the plastic bowls fall apart and you can't engage the motor without the locking bowl and lid.  Replacing those parts run around $60-$80 depending on the model.  Argh, not now!  I pried the lid off with screwdriver to release my trapped pasta dough and realized it had just whizzed it's last batch of pasta dough.
So while the noodles dried, I jumped on Craigslist...... 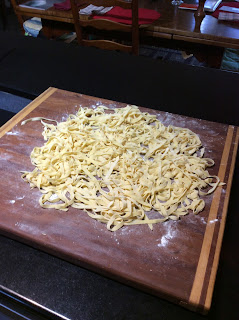 and I made pasta and then started wondering if Cuisinart was still a good product because I was noticing a lot of grumbling on food processor chat panels.  Food processor users were in full on revolt with everything from customer service to exploding blades.  Yikes! 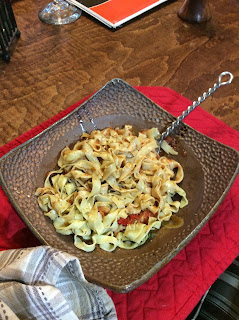 and by Tuesday morning I was pretty sure I was going for something other than a new Cuisinart and found a listing for a Kitchen Aid 12 cup for $80.00; touting BRAND NEW, still in box.
So I went for it.
Brian emailed back right away and I called him and heard the wayward story about how his ex-wife had just left it behind.  OK after 2 minutes on the phone with Brian I was kind of thinking I would probably like Brians ex-wife .
But I really needed a food processor and this was pretty nice so I proceeded onward.  OK if you read the last blog about my wood stove guy I cannot believe one of you blog readers didn't run up here and clobber me with the kraut mallet!

KILLER GET IN THE VAN! 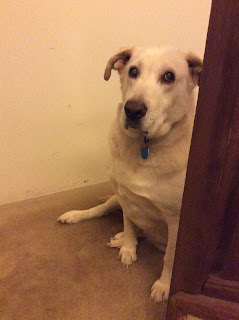 Sitting under the light; I caught up on emails, talked to the dog and sang along to Carol King.... loudly!  6:45 pm; no Brian, no food processor.  Call Brian..... no answer, leave message.  Two seconds later he calls back; Are you there?  Ummm, you were supposed to call me. BRIAN!  This is food processor, I emailed you, are you secret squirrel?  And Brian says, I live 20 minutes away, can you wait?  YES BRIAN I CAN WAIT!  and my inside voice is like...... Brian you're an idiot and this is why you have an ex-wife.  And then thinking this was kind of a weird interaction I started wondering if he was just selling this out from under his real wife and she would show up and kill all of us.  Gawd, I hate Craigslist!  Maybe I can sell a couple more mugs and buy one from a real store.... with a coupon of course!

By now Butch had called numerous times and offered to go to Bed Bath and Beyond with his 20% coupon (he gets me)  and buy a new food processor because he really likes homemade pasta and chopped veggies and pie.  I will call you the minute I have the contraband in my van and headed home, over and out!

7:42 pm Brian plowed into the parking lot, alone thank you soooo much.  As suspected Brian was different.  He rolled out of his low rider (not really, just a car with no shocks) and said; Wow, nice van!  Whadda ya do with a van like that, oh wait I bet you work for Amazon or something.  Ok Brian made me laugh!  No Brian I'm a potter.  Whoa, what's that?  OMG BRIAN DO YOU HAVE A FOOD PROCESSOR?  Ummmm, yes I do.  And thank the food prep gods on high he pulled a shiny new food processor out of his car complete with accessories!
While he handed it over he kept asking me if I ate a lot of healthy food and healthy food is really good for you.  So asked him why he didn't keep it?  Nope too scary for him..... kind of like me in this parking lot with Killer snoring in the van?  Here's $80.00, gotta go!  Thanks. 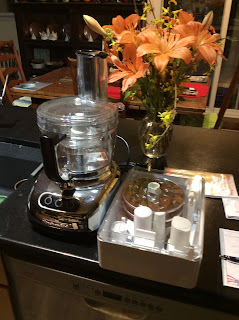 and it works like a charm and it still had the styrofoam between the blades!
It really is brand new, although older.  The bowl is significantly heavier than the Cuisinart and it has a great little inner bowl for small stuff!  With my Cuisinart I had to buy yet another appliance and I did, I bought a $10 slap chopper that I love!

During all this food processing I've had time to peruse Craigslist and have found all kinds of stuff I really need!
On Saturday I am meeting a woman in yet another parking lot and picking up a ramp for my van!  No more picking up a 91 pound usually wet dog to go for a ride.  He will be able to walk in the van!
$25 is one third the price of visit to the chiropractor!  This purchase is a 2-pher; Kirby and me!
Found a guy named Bob who made a couple chairs for his daughter and seems he couldn't stop so now he sells a few on Craigslist.  He lives out in the middle of no mans land and he's retired.  So I bought two chairs for my fire pit and this time I'm taking Butch and Kirby with me on Saturday.
Oh and I don't think Bob is making any money as they are $60 which is more than the wood and screws would have cost me!  And it keeps an old guy busy with power tools and off the streets! 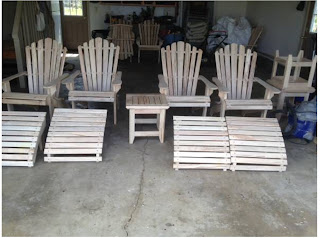 I have time to perfect my moscow mules and sit in one of these chairs,
drink a Moscow Mule and watch a few chickens this year! 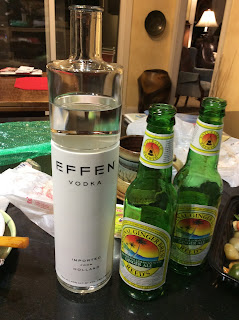 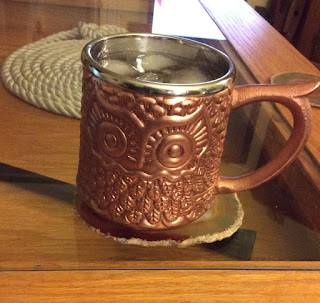 And as to the politics in the country at the moment 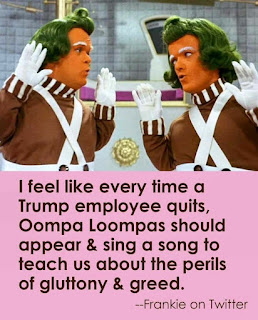