Today the heat is keeping me indoors and it's the perfect time to catch up on long overdue blog posts!

Ten days on the road with Kirby the wonder the dog and Mr Happy.
I took notes on this trip because we never stopped in any one place long enough to get a blog post up!

May 1st the packing started.  The weather channel was ambient noise in the background while I shoved 10 pairs of socks and underwear in my dusty old backpack that hadn't seen the light of day since my last trip to Colorado.  Through the mental lists of necessary and frivolous items I heard the word HAIL AND TORNADOS MOVING ACROSS Kansas City, TAKE COVER.  Underwear dropped from my hand and I choked down my coffee.  Then Jim Cantorre stated loud and clear; "Folks, it has been 191 days since we have seen a tornado in the midwest."  JIM, you didn't get the bulletin I was driving to Colorado, right through Kansas City?  Every freaking time I back out of the driveway the weather gods rain down upon us.  It's like my very own little cloud of flash floods and apocalyptic snow storms.  Example:  headed down for a pick up of clay last weekend (I have not left the compound since returning from Colorado on May 12th).  The sun was out while sitting in the driveway...... 10 minutes into the trip and I give you the drive into the abyss. 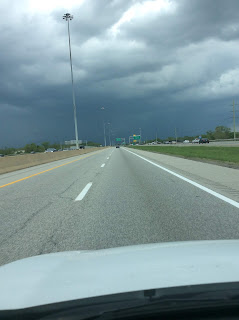 I am ok with rain but hail, not so much.  The van didn't even have 10,000 miles on the odometer and the report of baseball size hail made me think of an alternate route.... like Canada!

Wednesday morning we did last minute packing, looked at the map again, listened to the weather again and decided to go through Chicago, Iowa, Nebraska and finally Colorado.  We are idiots.....
Thank God, the Titanic has already sailed because I am sure we would have bought a first class ticket and stood on the slowly tilting ship asking: What's an iceberg?
We backed out of the driveway at 2 p.m. and headed West.  Destination; Gunnison, Colorado by Saturday morning graduation or bust.

Round about Toledo the rain started.  Not too bad but then the wind picked up, still manageable, halfway across Indiana the sky started turning black and I thought we better make a pit stop to water and walk the Kirbs.  There a nice grassy enclosed area for pets. 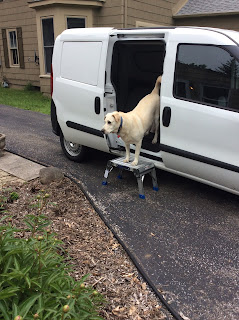 Kirby used his step stool to exit the van as a lovely woman rounded the corner of the rest area and remarked; WHAT A BEAUTIFUL DOG!  Kirby, then stumbled off the curb and full face planted into the chain link fence.  I smiled and said; He's is the best dog!  She laughed and walked away shaking her head.   Everyone refreshed, back in the car and the sky just opened up, we had blinding white out rain and wind but High Five fellow travelers, no hail and no tornados.
We beeped and creeped our way across Indiana at 25 - 35 mph.

There is nothing to do in Indiana, nothing to look at, unless you're into the RV Hall of Fame and trailer factories and somewhere around Shipshiwana they have a flea market, make a lot of quilts, eat pie, and church is really big!  We finally made it to the border of Indiana and Illinois and the very first billboard in Illinois:  "ALL THE LIQUOR NONE OF THE CLOTHES".  What does this even mean?
Jesus is real busy in Indiana but just can't make it over to Illinois.  This must have been a mind blower to Mr Happy too as he said nothing but then in the wee hours, somewhere in Iowa he said: So what does "All the liquor and none of the clothes" mean?  By 2 a.m. I was looking for deer, bear, coyotes, a Welcome to Colorado sign.....

Just over the Illinois border we pulled over for gas and Starbucks, water and walk the dog .... again.
Standing in line at Starbucks, the old guy in front of me was complaining about the price of a cup of coffee.  "I remember when a cup of coffee was 15 cents!"  I said out loud; Wow, you're really old and you could lube your car with that coffee or use it as deodorant.  Ya, I think I was a waitress at Howard Johnson's in 1971 and coffee was 25 cents but I would never say it out loud!  And yes, we were waitresses and not servers and I had to wear a little peach uniform with a white apron and white head band and white wedgie lace up shoes and we had pay toilets too. Ahhhh those were the days....... NOT!  I say drink good coffee, wear black, demand equal pay, punch a guy who swats your bum and pee free people!

Oh back to road trip from Hell.  Refreshed and ready to face Chicago traffic.
10 p.m. and we thought we would miss rush hour as we were on the south end of Chicago on a freeway.

Chicago traffic just brings out the princess in me!
A few things blurted out while sitting in completely stopped traffic at 11 pm.

1. THE BERM IS NOT A LANE!
2. IF YOU HAVE A HANDICAPPED STICKER DANGLING FROM YOUR REARVIEW MIRROR YOU SHOULD NOT BE GOING 100 MPH!  (same theory as seeing braille at the ATM drive thru)
3. We have been stopped for over an hour on a freeway, there better be bodies and a life flight up there!
4. Why is the oncoming lane flying?  In a hurry to get to Indiana?
5. LET ME JUST WALK TO COLORADO I WILL GET THERE FASTER!
6. CALM DOWN at least the dog doesn't have diarrhea. 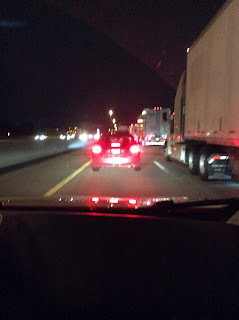 As we snail sprinted along, boxed in by semi trucks, I never saw the I-80 sign 4 lanes over to the right.  I attempted the Chicago slide to move over 4 lanes in 50 feet while reading the bumper sticker on the semi truck in front of me; THINK SAFTEY FIRST".  Nope, we're all gonna die!

We made it to the other side of Chicago at 12:30 am;  three hours to get through Chicago.  Open road, darkness and the radio on.  Get out of my way.  I had planned to drive straight through but we were headed into another head banger storm the other side of Davenport. At 2 am we started hunting for a hotel to ride it out.  Again, High Five, no hail just blinding rain.  Up at the butt crack of dawn to  fuel up at the breakfast buffet before hitting the road.  I duly smuggled a hard boiled egg and ham pieces back to the room for Kirby.  He was delighted!

We hoped to hit Gunnison by nightfall.  We drove all day and as the sun was setting we were still in Nebraska, sheesh this is big country!  We should have never stopped in Omaha to have coffee with Warren Buffet!  Nebraska, I have never apologized to so many cows in my life! Feedlot after feedlot....... argh.  How much meat can one country eat?  and I will leave it there because I just cannot cannot cannot.  Even Mr Happy, who loves everything said; "life just seems hard here."

While gassing up the van in Oglala, Nebraska I did a quick fashion Do's and Don't while sitting at the pump.  A young kid sauntered out of the Kum and Go gas, food and liquor store (not making this up!!!) chugging chocolate milk and Red Bull, while puffing on a Newport ciggie.  (talent knows no bounds). He was stylishly dressed wearing black socks, flip flops (really!), baggy shorts, butt crack visable upon entering his vehicle and ninja head wrap positioned just under his man bun so his ears stuck out.  A fashionista's vision...... GQ cover for sure!
At 12:30 am we were on the south side of Denver in Castle Rock and knew we were not going to make Gunnison.  We also decided not to go over Monarch Pass in the middle of the night as it's always snowing at 13,000 feet and no guard rails; start looking for a room........again!  This trip was starting to sound like the Donner Party and the only one getting out alive was Kirby, who would be 50 pounds heavier from contraband breakfast buffet treats.

I managed to keep up with world new on my iPad as we chugged along.  I read about Steven Hawkins posthumous article to be published proving parallel universes.  Good, because my other self is clean, stain free, not covered in dog hair and loving road trips.  We had been in the van 30 hours and still not there.  Note to self; NEVER EVER TAKE THE NORTHERN ROUTE TO COLORADO!  What's a little baseball size hail.

We rolled into Gunnison at 1 pm on Friday we were looking a bit verklempt or even homeless.  I had packed a cooler filled with salads, fruit, juice etc.  We took advantage of the breakfast buffets and never stopped anywhere for takeout or sit-down.  While Mr Happy drove I attempted to eat salad while hitting pot holes and speed bumps.  Around Salida, I figured out Mr Happy had cranked the seat back to sleep and it was like eating salad in bed.  He thought this was hilarious and never mentioned the seat.  How is it we have stayed married 36 years...... the mysteries of life. 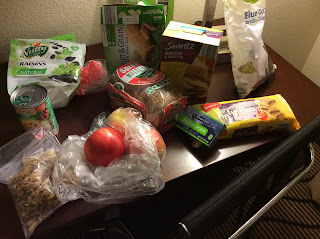 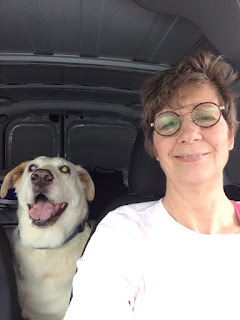 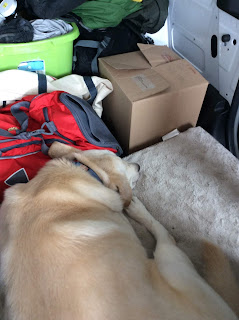 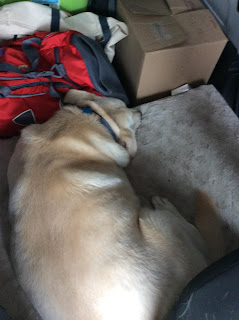 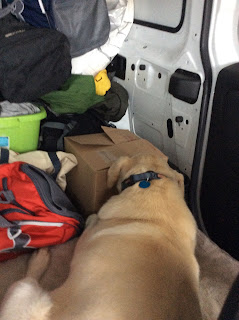 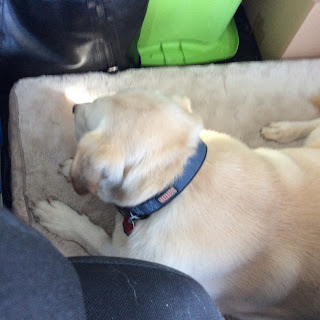 Kirby just before Monarch Pass, Colorado, day 3.
This is his fried; "Are we there yet?" look. 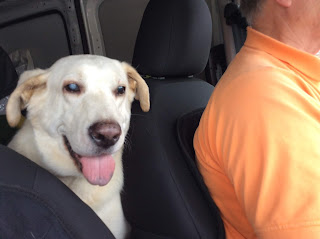