Wow, June 1st, how did that happen?  This has been a year of, can't catch up!
With all energy plugged back into the studio and seemingly running at top speed since January we thought Memorial Day would be …… THE WEEKEND.  You know, fire up the grill, attend our Mayberry RFD parade and see how the neighbors fared through winter, slam a few tomato plants in the ground and play hard, nap hard and languish in the warm rays of Northern Ohio.

Reality ….. our giddy anticipation waned Saturday morning when Butch came up from the basement, announcing in flowery overtones; well the sewer is backed up.  Well great let's just call somebody to come blast out the pipe. He cleaned and mopped, I turned off every faucet, washer, dishwasher, etc.  And we started going through the plumber list.  We don't have a big list because we fix most things ourself or ignore it until we just can't stand it anymore.  Holy crap, (literally) it's a holiday weekend!  Instead we called Jed's Rental and got the turbo jet pipe cleaner.  He wrestled it down the 180 year old steps, and blasted away for four hours.  Is there a worse job in the world on a hot holiday Saturday afternoon?  Four hours of blasting and not much happened.  We are on hold until somebody calls back.  At this point PIB takes on a whole new meaning!  No, not Put In Bay. Or back in the 90's when the ultra chic wore nothing but black, were Kate Moss cracked out thin and wearing block out the sun RayBans. PIB's People in Black and they were everywhere!   Well fast forward to happy acres holiday weekend and PIB means Poop In a Bucket filled with cat litter.  I think I will get one of those great little stickers for my car…. 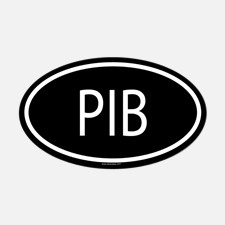 Thinking surely some kind plumber will call back on a holiday weekend, we started day drinking… it is a holiday. 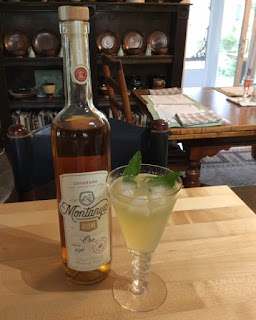 As the afternoon dragged on, we had one guy call back, AJ.  Bless him and have another drink, he is on the way.  An hour later the phone rang, AJ and his van were sitting on the side of the road somewhere waiting for a tow truck.  We went into PIB! (Panic Induced Breathing from the fumes coming from the basement) and poured another drink.   We sipped and walked around the buried pipe in the front lawn, cursed the city for planting giant Norway maple trees on our tree lawn over the sewer pipe.  Not a cute little ornamental tree.  Oh no, full out giant maple trees with roots going to China.  But then we do live in Painesville and we do not have a PIB (Public Investment Board because who names a city Painesville anyway? Our senior center was once featured in an Advil commercial)  We dragged out our survey plot blueprint to figure out where our house tied into the main sewer, again PIB (Parts Illustrated Breakdown) and discussed digging up the lawn but alas we had one too many mojitos to find the shovels. (PIB, Partially Induced Blackout due to mojitos) In the sweltering heat of Saturday we hooked up the outdoor shower. 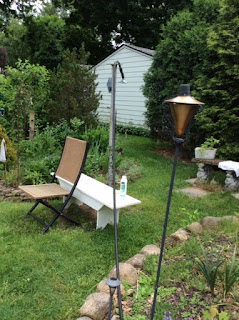 We showered at dark thirty in ice cold Lake Erie water, again PIB (Panic Induced Breathing with a side of screaming) Sunday morning and still no plumber.  AJ called and he wasn't faring much better, the van was kaput and I was having a PIB (Pain In the Butt), get the bucket warmed up and I will spare the blogosphere from PIB (a Photo Intelligence Briefing) In reality I drove over to the library, took out a book and used the restroom.  Good news the jet blast from yesterday had moved the water down the sewer and the pipe was clean but not really working.  Sunday, still no return calls.  Ok, I take that back.  One guy called back, Plumber 911.  I was almost giddy with delight.  Yes, he would be there Monday morning at 8 am.  Then Plumber 911 called back Sunday night at 9:00 pm,  actually it was his wife and wanted to make sure we agreed on the cost.  Nope, nobody had said anything about cost when he called the first time.  Hold onto to your PIB's  $597.00 to clear a line.  Butch was so mad he told them; NEVERMIND!  It was probably good Butch took the call as I would have paid dearly to flush at toilet at this point!  I just glared at him when he hung up the phone and ran to MacDonald's for a cup of coffee and the bathroom.  I told him to drive himself and he could not get in the car with me. No PIB'S for you! (Partner in the Bathroom!)    Monday, no return calls…… camping?  By Monday night I was just pissed and ready to call in the PIB's (Parachute Infantry Battalion) to get us the hell out of happy acres.  Tuesday morning Butch called from work at 9:30 am yelling into the phone….. They are on their way, clear a path.  Who the PIB's?  No, Roto Rooter! 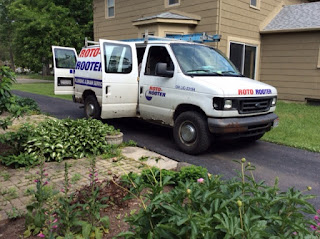 In one hour they wrestled the turbo snake down the basement stairs, cleaned out the lines and we were back in business!  I wrote a check for $185 and gave them each a mug filled with ice water!  We were all happy!  I flushed both toilets, ran the dishwasher and did a load of laundry.  It was wonderment!
This morning, basking in the glory of the flushing toilet, neighbor Karen called to alert me the city had blown a massive water main break and we could without water for 24 hours……
Could someone please send the WAAAAAA-BULANCE for me.  And alert the library…. nobody reads this much!

Oh and while this was going on Butch had taken his car to the corner Conrad's to get new brakes and an oil change.  They called, it's never good when they call….. could he please come down and fill out a police report.  What?  The poor mechanic had taken the car out for a test spin and some woman in a red malibu hit the clown car and sped away.  The poor mechanic was sent home for a drug test, because it's a state law, the woman is still on the loose and Butch is probably going to get a spanking new bumper on his car that has 285,000 miles……  This incident is so low on our radar we almost forgot about it!

So Happy Memorial Day everybody! 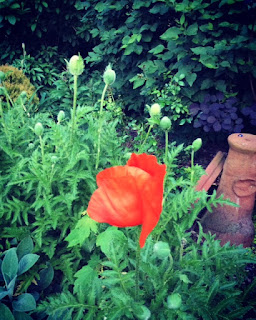 And to leave you with a bit of good news…….
both kilns are hooked up, working, vented and filled!
Woo Hoo!!! 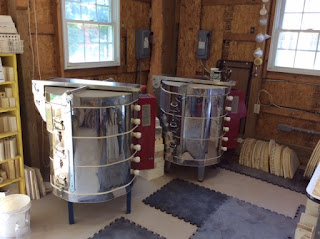 Getting ready for Boston Mills……. 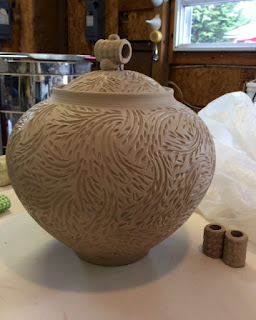 And sold a bunch of pots to the new Hilton in Cleveland!!
more blogging on this later :) 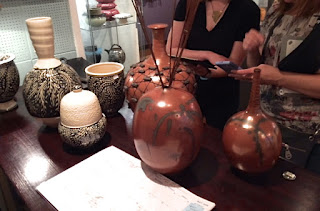 and there is a fantastic Ceramics Invitational at  Artist Archives of the Western Reserve !
If you are in the area stop in, it's a beautiful show!

The Artists Archive of the Western Reserve is proud to present its Ceramics Invitational Exhibition, a showing of the vibrant work of local ceramic artists. Curated by Mary Urbas, this exhibition highlights the exceptional clay community of Northeast Ohio, bringing to the forefront their unique and diverse vision of this primordial medium. The show’s ample


and Rufus is holding down the fort…….. 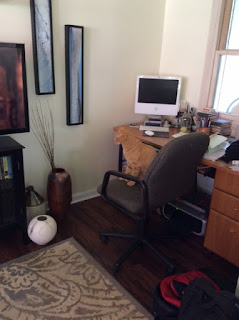