Lessons from the Farmers Market....... 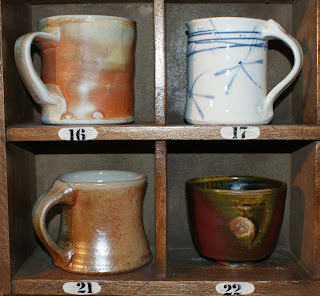 Pulled out of the driveway at 4:02 a.m. and hit the road south to Louisville, KY.   As a member of the Louisville Clay Guild I was excited to participate in the Home Grown Home Thrown Guild sale.  Anxious to see what was new in the potters realm of Kentucky.
Six and half hours later I pulled into the Deer Park Baptist Church parking lot to see Ms Linda Bowman waving, smiling and showing me where to park.  Set up started at 11:00 a.m. and I made it by 11:04 a.m.

It hit me on Thursday, while packing that I was not going to the Smithsonian but an asphalt parking lot on Bardstown Road.  Why did I need the trailer?  But I packed on......... I took bee plates, I took woven pots, I took lanterns, I took tied down urns....... I took it all, because you just never know who is going to show up at a farmers market!  I took shelves, I took pedestals, I took the big canopy and on it went.  The truck was packed, the trailer was packed, the thermos was full of hot coffee and I held a piece of toast clenched in my teeth as I waved goodbye to the dog and husband.
Butch and Abby were staying behind to attend the opening at Lakeland Community College.
Yeah for the "Art Pot" that was accepted and won the Jurors Award for Three Dimensional Media. The electric bill will get paid!  Thank You Lakeland!!  (very cool because it's where I took my first clay class so many years ago)    Lakeland CC May Show

Back to the Parking Lot.  Not wanting to impede other artists from setting up, I parked in the back lot and lugged my stuff up hill and across gravel to the display area.
Remember the Hungarian Motto is:  "Why Do When You Can Over Due?"
Or as Dolita reminded me several times....... If there is a hard way to do it you and Gene will figure it out!
Setting up the Craft Hut took a bit longer than the potters around me who brought the EZ UP...... there is a reason it's called an EZ UP and since there was no wind or rain and just sun the EZ UP was the way to go.  Drilled the shelves together and put the pedestals together.  It took me until 4:00 p.m. to set up.  I was still pricing when shoppers were coming through the door.  And can I say I was icky sticky and not so fresh!
Looking like I had been dragged behind the trailer from Cleveland.

Sales were good and expenses & gas were covered!
Sales on Saturday were better than Friday and I was so thankful as my brake light was on all the way home.  The weather was hot this year but no rain, Happy Dance!

Best part of doing this show is dinner.  Six tired potters rolled down the sidewalk around 9 p.m to a great little eatery for drinks and serious noshing.  The company at the table was fantastic.  We talked pots, shows at the regional level, shows at the national level, studio sales, teaching private lessons and how to make a living at this thing called pottery, can it be done?  The foibles of the day........

The weekend was mind boggling and so much was learned.  After not participating in street shows for the last 10 years or more there was a lot to learn......... again.

1.  Get rid of the stainless shelves.
2.  Hollow-core doors are fantastic!
3.  Art does not sell at the farmers market leave it home.
4.  What did sell?  Anything with a bee on it, lanterns, flower frog vases, pate' dishes and anything with chopsticks, pate' knife or candle.
5.  Talked oil spot glazes with Sebastian and there will be testing in my future!
6.  Scheduled a show at the Mary Anderson Center for July/August 2012....... plenty of time to load the trailer!
7.  Be the grape and not the raisin....... stay hydrated!  Put water out in a hand thrown bowl for our 4 legged friends, they are way hotter than the nut holding the leash.
8.  Added to the mug collection and scored an awesome wood fired batter bowl from Matt Gaddie, yes, I'm a fan. 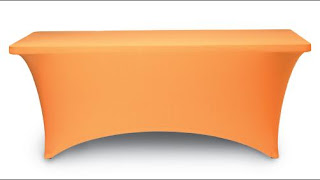 I am having trouble splitting my work into the world of "Art" and "Craft".  Each takes just as much thought in the execution.  The bee plates, pumpkin pots and lanterns took just as long to get to as the woven rimmed pots.  To stay financially afloat right now it was a general consensus around the table of wise potters you need to be in both worlds.  Which is great because I love both worlds. 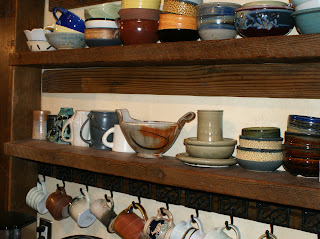 The batter bowl is just screaming for Sunday morning pancakes!
- May 23, 2011 No comments:

Show in Louisville, KY this weekend! 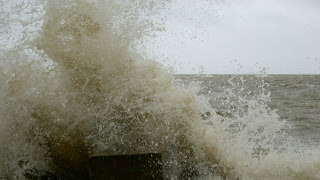 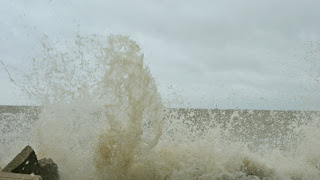 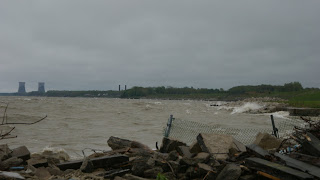 Every time I think we should pack up and leave this area we get a rip'n storm.   We have been underwater for the better part of a week now.  Gardening bad, studio time good.  Yesterday the wind shifted to the North East or N'or Easters around here.
Unusual this time of the year,  N'or Easters are normally fall and winter weather patterns but then it's May and anything goes.   We have had our fair share this year but the power of these storms never ceases to amaze me.
Butch and I run to the beach and jump out of the car, very much like getting out mid car wash at the Bright and Shine $3 car wash.  I always take the camera but never manage to catch the fury of Lake Erie.  This is as close as I can get.  If you are reading this get a spritz bottle and spray yourself as you read, oh and turn the fan on high.  Sometimes it's a challenge to stand upright.
So much has gone on since last blogging.  I have applied to a number of jobs; every thing from gardening at a yacht club to professional organizer for a oil painter........ now take a breath and stop laughing!   While interviewing for the professional organizer to another artist I had epiphany.  Listening to the job description the little voice in my head said;  "Hey, if you did half these things for yourself you would not be looking for a job!"  Thank you little voice!
I politely said;  "Grand, talking with you and I cannot possibly work 3 days a week". (I've been watching too much BBC.)  After hanging up the telly I got out my trusty pad of paper and made a list of what I need to accomplish in the next 30 days.
I love lists and as I am task oriented it is a rush to cross off  little victories on the master task list of my life.
In the next 30 days.......... (written in purple Sharpie, no wait isn't purple the color of suffering?)
Get the yard whipped into shape and finish the gardens. Mother Nature you must help out on this one!
Re-vamp the website to actually sell work from a virtual gallery..........
Update my self published Blurb book......
Write in RED Sharpie Marker on my calendar and forehead;  STUDIO SALE - July 16th and 17th.
Get new postcards for studio sale.
Write up press release for studio sale
Get to Louisville, KY and hang out with other fab potters and sell pots on May 20th and 21st
Get to Shaker Hts. and sell pots on June 18th and 19th
Keep making those big woven pots but know your market and make some functional work too!
Up date website with new dates.
Enter more gallery shows out of state.
Enter more gallery shows in state.
Whittle ideas down to a few good ones and run with them.
Eat more bran........ 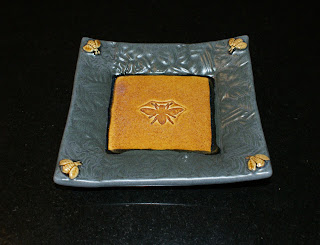 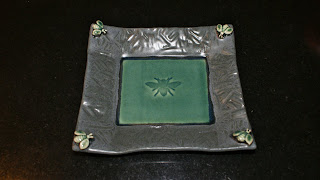 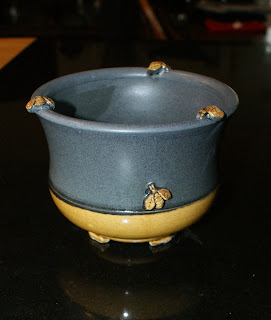 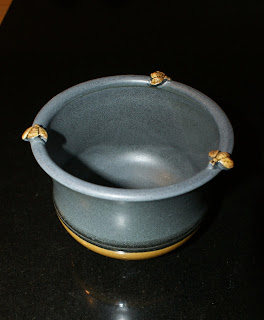 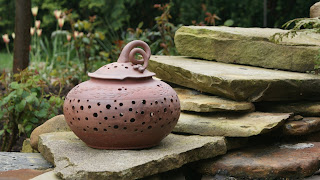 Pumpkin garden lanterns, love these lit at night!
Seem to be on bee kick lately.  The bees are gracing pate' dishes, honey pots, cookie jars and plates.  Working with a new clay has been a bit of a challenge over the past couple weeks and learning not all my glazes will travel to the next clay body.  Forgot to schedule time in studio for screw ups......
It's going to be a busy 30 days!
Hoping the sun shines on every one soon!  The rain has to stop ......... doesn't it?
- May 16, 2011 2 comments: 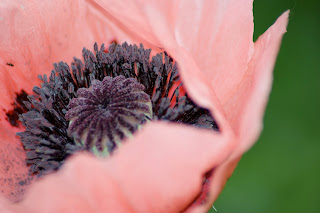 Spring has finally arrived!  On my walk tonight everything was new spring green and wet..... and we will live!!  I think we are out of the woods although we had a hard frost last week.  The poppies can't be far behind!  Besides the goldfinches have their spring duds on now so it's a sure sign we are on our way to Mojito Season!

Stuff is popping up in the garden and if we get a bit of sun I hold high hopes of eating my very own lettuce in another 2-3 weeks.  The birds have helped themselves to tender pea shoots and I will be replanting.

My arch enemy, Fred the groundhog has made his appearance and this year I will be trying a solar electric fence. (note, alert the neighborhood kids)  Note to self, the neighbor kids are fine but you will be fried by next blog.

Roses have been cut back, soil turned, seeds planted, dead wood pruned and grass cut.  This time of the year there aren't enough hours in the day.

Still taking time to make pots too......... well not taking time, just driven indoors from rain.  The last 30 days it has rained 19, could be Seattle but then I'd have a coffee shop at the corner. 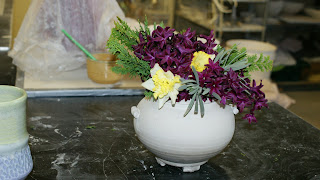 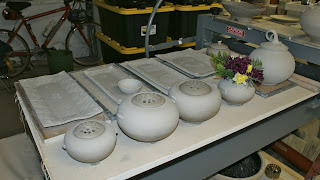 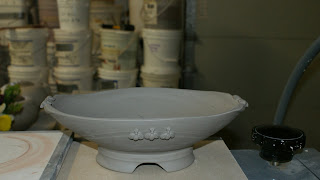 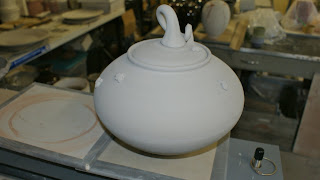 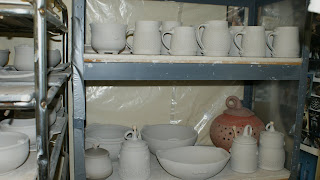 The big decorative pots are fun but boy I sure love making functional pots too!   The bisque kiln has gone up and now cooling.  Glazing should begin tomorrow......... maybe some new Spring glazes are in order!  And a first......... I'm making flower vases.  Memories from my Grandma's, she had these in emerald green glass sitting on a shelf in the basement.  Hoping the small ones will be beautiful with rose buds. 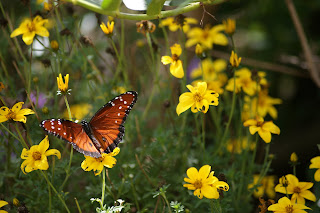