This dog I have studied and studied and allowed myself to love unabashedly has again surprised me!

Doesn't he look angelic?  This is his diabolical look, he's plotting. 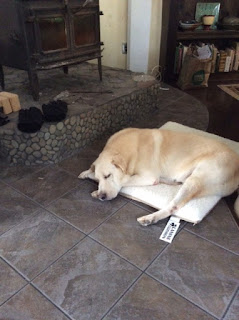 The last week, B. Miller walked in the room (twice) and announced: YOUR dog is upstairs, you forgot to lock the baby gate..... again.  I got him down for you.  First off, I'm pretty sure I locked the baby gate because I heard the click!  But then I did laundry and ran up and down the stairs a couple hundred times and maybe I forgot to lock the gate, it's totally possible but the second time I thought; No, the dog is just a wizard.  Then yesterday B. Miller was sitting in his office and we all heard a clap of thunder and he watched the dog wedge his paw in the bottom of the gate and spring it open heading up the the stairs.  B. Miller announced; "Wow OUR dog is smarter than a toddler!"  Yeah, now he's brilliant and OUR dog.  I wondered when the MENSA certificate would show up.  Kirby was on the landing shaking like a leaf.  I opened the window and let the cold December wind blow in and rain hit his face.  He sniffed the air and calmed down enough to let me get him down the stairs.  One step at a time, slowly.  Got him through the gate, took him outside and we stood in the rain.  He is fine if he can be in the weather, yeah, me too.  The thunder and lightening passed with one clap and the rain set in, so we walked and he calmed down.  Back in the house I toweled him down and as he settled in to clean his feet and fall asleep snoring,  I bungee-d the baby gate.  Now we can't get upstairs without swearing. We bend over, un-bungee the gate, go through the gate, pick up laundry or supplies that need to be hauled to the second floor, turn around in the tiny landing area, bend over, re-bungee the gate; while saying; STAY, stay, stay, stay....... stay!  I'll be right back.  I'm pretty sure he's laughing on the inside.

It's winter here in Ohio.  Well only on Fridays.  The Friday for Bizarre Bazzar, I packed up 6 boxes of pots and hit the road for the first big show and storm.  2 hours to get to Cleveland.  Snow blind!

And for those idiots with giant trucks outfitted with plows or 19 year old girls in Honda's who are crash test dummies, slow down and get in line.  AND excuse me but does blowing that horn make anybody a better driver?  NO!  And for the people who are terrified to drive, moving down the road slower than a paralyzed turtle with their flashers.  Yup, we all know exactly how bad it is and yup we can see you doing the beep and creep, gripping your steering wheel at 10 and 2 while peering through the steering wheel and peeing your pants.  Can we all just sanely get to where we are going?

and for the record...... Bizarre Bazzar reported 5,000 people coming through the door!
We are Cleveland and we drive in snow! 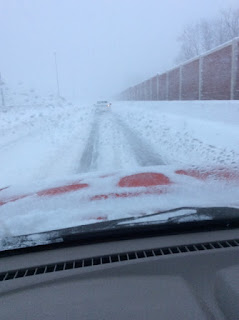 Made it home and drove back to Cleveland for the B. Miller Christmas Party.  4 hours in a car.
We made it in time for dessert, no drinks except espresso because I need to be just a little more wired.  I logged more hours in the car on Friday than a trip to Key West!  And stop saying; JUST STAY HOME!   He has to attend because it's his job and we were shocked to see so many at the party, nobody stayed home.  Home by midnight and back on the road in the morning.  I unlocked the gallery at 9:58 am, the show opened at 10 am.  The show closed at 9 pm, drive back home, sleep and re-opened at 10 am Sunday morning.  The show closed at 6 pm and I was toast.  And people brought their dogs to this festivity!  Neighbor Alan came over at the end of the day to announce a dog had pooped in his space during the height of the shopping day.  Seriously, if you are going to bring a dog to a party maybe you should take Fifi or Fido for a long walk first.

No recovery day!  Monday morning time to get a last minute order out; place setting for 4, due on Dec. 23rd. 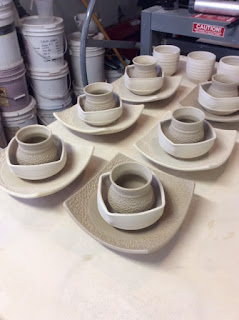 Third Friday rolled around 6 days later and we got belted again.   I guess that's why they call it the snow belt. I'm driving around with 300 pounds of sand bags in the bed of my truck.  It works great!
But I could be killed by sand if the load shifts.

I love people who show up at a gathering announcing the weather forecast.  "Wow did you hear what's coming?"  "Freezing rain by 10 pm!"  "What time do you close?"  "10 pm".  A cheerful soul looking at mugs says just loud enough for the entire gallery to hear; "Yup, people are going to die tonight".
Merry Christmas sir and keep shopping! 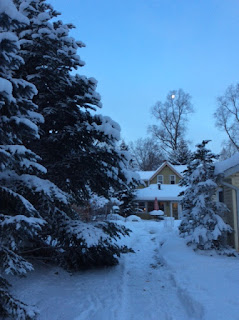 Then yesterday the temperature shot to almost 50 degrees after a week of subzero weather, 40 mph winds and snow.  I cleared the driveway.  Chipping the last few feet of ice off the driveway, the rain started.  It rained hard.  The 30 inches of snow melted fast!  Then the wind shifted to the North and temperature dropped to 19 degrees and we have a skating rink.  I blew the dust of my yak trax and took the dog out.  The deer were sliding around, the squirrels were fainting and the dog was lucky he had 4 legs. 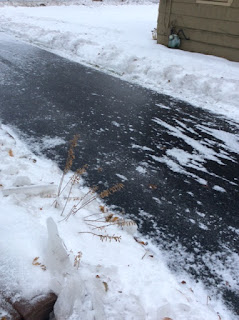 Speaking of blindness....... we have lived in our home for 30+ years now.  The house has taken on many many transformations.  6 years ago we tossed a large couch that.... well how do I put this, had become sticky.  The kids had moved out and the couch needed to go.  B. Miller had staked out the old front room as his new office.  Even though he primarily uses the kitchen table for all "office work".  I chalked it up to a midlife crisis and gave up on ever using it as a living room again.  The old dinning room where I fed up to 15 people at a large round table was gutted and turned into a weird room that housed a blueprint table and plants.

Then we Face-timed our kids last Spring and they said:  Are you sitting in the house on lawn chairs?   We had looked for furniture and could not find anything we liked or could agree on or fit in the tiny rooms of an old Victorian house.  We had become blind to the interior of the house..... for 6 years, the children informed us.   We work a lot!  I live in the studio and yard and B. Miller lives in his car.  We sleep here, occasionally eat here and try to catch PBS once in awhile.  We need a few chairs, computers and a good coffee pot.  We have exactly that!  No other furniture was really needed.  You get a couch, you fall asleep and become lazy.  B. Miller and I decided; no couch!  Nothing soft to sit on in any room.  Apparently a bit too Spartan for the children.  So when the holidays rolled around and after my declaration of not leaving home this Christmas, the children gave us the ultimatum.  Buy furniture or we are not coming home.  So we started the hunt, once again for unnecessary furniture.  I ordered a lovely couch from Macy's, paid for it, cleaned the house, took a day out of the studio waiting with unbridled anticipation for a delivery truck that never showed up.  Oh sorry we never called to tell you; IT'S OUT OF STOCK!  Then we went to LazyBoy and loved the piece on the floor but had to be built in Tenn. and there was an 8 week wait.  And then we found another one but it was in Chicago and they couldn't guarantee when it would be delivered.  How hard can this be I thought, I am waving money at you!

We sat on so many couches and love seats, my butt was tired and I lost count. Too big, too low, too soft and can you help me out of this one?  And we live in the land of giant furniture.  Furniture today is HUGE!  Why?  How much padding do we need in this country?  And a couch with cup holders?  Wondering if I pulled the seat cushion up, could there be a port-a-potty?
But here is the couch that just put me over the edge and I had to go home immediately!  This primo, top of the line couch has a refrigerator, cup holders, motorized recliner and optional massage feature.
Imagine the change you could find in this thing after a year of lounging!  I could park at meters for a year with the quarters wedged in those rolls!  And I bet there would be enough popcorn, crumbs and silverware to feed a third world country!  B. Millers eyes rolled back in his head and we were in a downward trajectory.  "If we get this we have to get a bigger TV!"  Who buys this stuff?  And that is a lot of STUFF-ing! 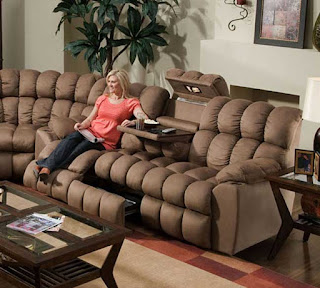 How about a treadmill instead of a giant piece of ass cuddling fabric?   And then a local giant furniture store had a Black Friday sale and guaranteed delivery before Christmas.  So I ventured out..... again!  I found three models that would work, tracked down a salesman and waved my checkbook at him.  Choice #1.... out of stock.  Choice #2 only available in teal.  Choice #3 is available.  I almost kissed him!   We cleaned, ordered a new rug, got an old chair recovered because it's the first thing we ever bought over 30 years ago.  And why does recovering a chair cost more than a brand new couch? 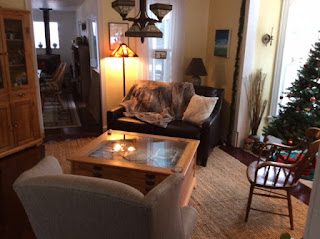 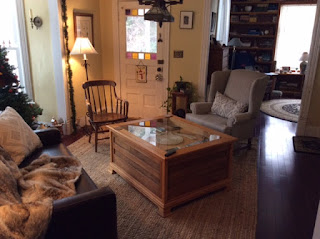 And do you want to know how happy I was when the salesman told me the couch should last 30 years if we take care of it and my first thought..... oh thank God, in 30 years I should be dead!
So this is it and I can never do this again.  And dear children you are not allowed to eat in this room, not one cookie, not one beer and keep your feet off the furniture! 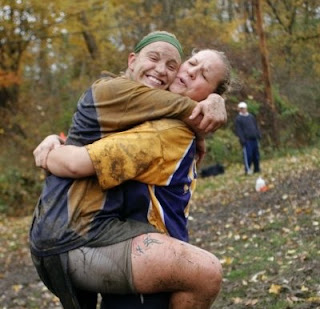