Definitely Can Live Without!

Who knew the list would be uploaded in record time?  Since Monday the fur has been flying and the only reason I'm pounding away at my desk this morning, rain.  Sweet wonderful rain, we needed it!
This is not a Beatrix Potter post..... 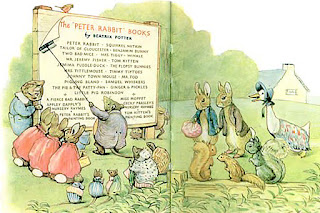 When we returned from Colorado and I started weeding and popping seeds in the raised beds in the way back garden I noticed a garter snake.  I don't see very many around here so I thought great!  Came in for lunch and went back out to find a bigger garter snake french kissing a toad but the toad became dinner within a few minutes, OUCH! 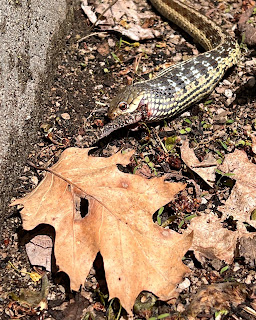 Of course I uploaded the entire video to Instagram while still standing in the garden.  As I loaded the video another skinny garter snake slithered over my boots.  Eeeeck!  I have never seen this many snakes here before.  But no worries they eat stuff like grasshoppers and locusts and other garden pests but I wish they'd leave my toads alone!  I kept weeding and emptied my bucket of weeds on the compost pile and saw this! 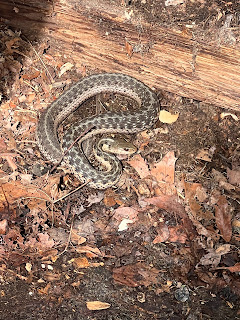 Betina, look at this!  Whadd'ya think?
Ethel does it taste like chicken?  Dunno, let's ask Elinor
and off they toddled, leaving the snake alone.  The snake exited using a chipmunk hole
The girls never returned.
I declared: We shall live in peace this year of 2022!
Had the rhode island red chickens been here, otherwise lovingly referred to as the idiots,
this snake would have been lunch! 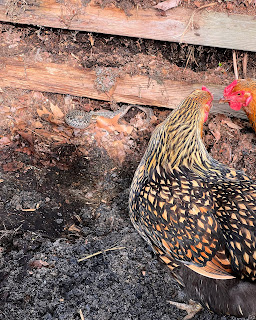 And so we live in peace with the snakes but while cleaning out the flower beds around the pond I found a skin and a smaller snake in the iris bed.  This is so many more snakes than we have ever had here at happy acres.  Not sure why because we had a pretty hard winter.  I am sure they will be in the basement soon and that will end the 2022 détente.
Tuesday night I strolled to the back 40 putting the ladies to bed and close the coop for the night.  Head count, 3 happy chickens perched and murmuring to each other.  I say goodnight ladies, and they always coo back as I drop the door, putting put a brick in front.
Walked around the back to pick up the food and water for the night, unlocked the door, reached in and recoiled in terror!  A masked trash panda was siting on his backside propped up agains the chickenwire fence shoveling in arm loads of pellets!  He was as shocked too and couldn't get his grimy little paws under his chonky butt and gatored in the dirty for a few a seconds, then whizzed past me on a tear and up the post to the compost pile.  He turned and looked at me like I was the intruder.  Oh ya buddy game on because I am coming for you!  I like my chickens alive and I like my one or two eggs a day.  He'd eaten enough chicken chow he should be laying a couple eggs by dawn!
Closed the coop, grabbed the food and water and began plotting!  Find the trap and now what to use as bait?  They love corn and watermelon but not in season yet.  Hmmmm peanut butter on an apple!
The very next night I loaded the trap with a smelly apple and put it next to the coop.  Went out at 10:00 pm and two beady eyes stared back at me ..... from inside the trap!  YES!  Gotcha and I happy danced off to get the wheel barrow.  Put a tarp in the back of the van and tossed a towel over the trap to calm the snarling, teeth barring, raging coon into silence.  Tossed him in the wheel barrow and rolled him to the van.  Tossed him on the tarp, towel still intact and Millers relocation service was back on the road. 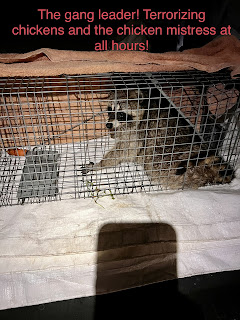 Heading out to my usual spot where I can back the van in, drop, release and flee the scene in the darkness of night.  It's been a plan that has worked pretty well the last few years.  As I approached my turnoff I noticed a Sheriff sitting in a parking lot watching the light.  Crap!  Nobody and I mean nobody heads down this road unless they're dumping something; bodies, washing machines, trash, trash pandas; all illegal.  It's dark and deserted but has water, lots of water, trees galore, and trash cans.  Raccoon paradise.  I drove down anyway, watching in my review mirror and noticed somebody following and not only that, parked at the end was a park ranger vehicle!  This is not happening!  Plan B, keep driving to the next favorite place.  Slowing down and pulling in a small parking lot sits a large pick up truck, Ford 250 and small white Honda with windows fogged.   Really?  It's Tuesday night get a room I am driving around with a ball of angry terror and followed by the cops!  So I moved to the next place which is no where, I don't have a plan C but keep moving!  Finally I pulled over to gas line installation in a wooded area of an industrial park that has lovely ponds and prayed it was too early to have any security cameras.  I didn't even shut the van off, I ran around back, grabbed the trap, fumbled with the door and he was gone!  Toss the trap in the back of the van and noticed he had relieved himself all over the tarp.  I rode home with the windows open and gagging.  Tossed the tarp on the driveway and would hose it down in the morning.  It was 1:45 am.  Everybody is good, all fingers accounted for and chickens!  Lights out!
The next morning I got up to hose down the tarp and start gardening when I saw fur up and down the driveway in the front yard!  Horrors!  A bunny nest and my prize hostas strewn over the beds and driveway.  Behind the taxus on the front of the house a public toilet of raccoon pooh.  For the love of all things furry you too are going down tonight! 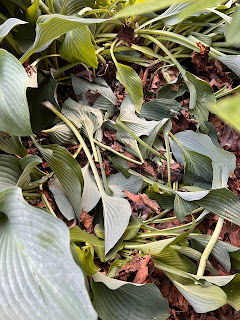 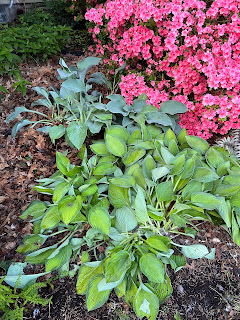 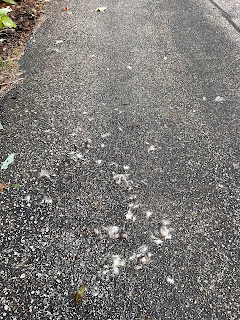 Loaded up the apple and peanut butter and nestled the trap around the shredded hostas. I was tired and really wanted this to end quickly.  By 10:30 pm #2 was trapped, loaded and relocated to a different place. 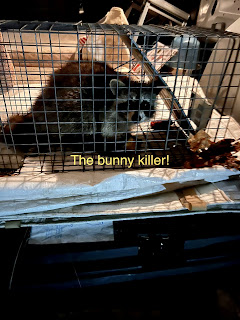 I was home by 11:15 pm, as this one went very well and he seemed happy to be released.
I was on a roll and it was early so I loaded the trap again but was out of peanut butter so I switched to sardines.  Phew this should bring in everybody!  Set the trap in the way back again around the chicken coop and checked it in 30 minutes.  #3 was in the trap.  Yes!  grab the wheel barrow, tarp the van and off we went into the darkness by 1:15 am.  Again the Sheriffs SUV sat at the light!  I started making up stories; my husband forgot his lunch, um ya it's a sardine sandwich sir, heard there were shooting stars tonight and thought the park was perfect, couldn't sleep so out for a drive.  Please just sit there and ignore the white van with all the subversive bumperstickers........ GIVE PEAS A CHANCE!  He stayed put but now I decided to head south, driving down back roads, around curves I remembered a favorite fishing spot in the middle of nowhere.  Takes awhile but so worth it as this daunting feeling that, little old me could be pulled over at any moment with a raccoon in a trap. Even with a towel over him so he wasn't visible, except for that little searching paw sticking out, the stench of sardines was enough to make an officer want a second look.  What's under the towel lady? Would I say it?  "Not without a warrant sir."  YUP!
Finally got to the fishing hole, raced to the back and opened the trap.  Nothing.  You're free, go off and maim things here in this lovely place.  Nothing.  Seriously?  I took the towel off to see what the problem was.  He was facing the wrong direction!  Now I am standing in a dark parking lot trying to cajole a stupid raccoon out of the trap.  I tipped it on end, I shook the living daylights out of it..... I had captured velcro raccoon!  Still facing the wrong way I held it over my head to see if his foot was caught.  I have never had this happen, ever!  I shook and cursed and poked for a good 10 minutes, I was exhausted; Mr Velcro not so much.  I put the trap down and said;  Please just go and he calmly walked out of the trap and into the tall weeds.  Tossed the trap in the van and rolled home in my stench laden van with a cloud of raccoon stink and sardines.  I crawled into bed at 3:42 am,  Mr Potter rolled over and groaned.  Swear, I'll shower in the morning and wash the sheets.  I should have stopped at two but OH NO why would I do that.
I am now waiting for the ground hogs to show up........ 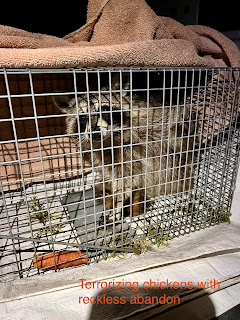 I spent big bucks and got this:  an automatic chicken door.  I have been getting up at the butt crack of dawn to let chickens out for years.  Have left art opening to close the door before the nocturnal creatures started their nightly jaunts. It gave me a reason to jump out of bed in the morning and I loved it!  I have done this for years and most times it was a great excuse to leave the party.   I never once missed putting the girls to bed and this is my second flock.  This closes at dusk, has a little flashing blue light to alert the chickens lock down will begin shortly.  It also automatically opens at the crack of dawn.  I still have a dog that wakes me up but the urgency is gone!  I walk out to 3 pairs of eyes excitedly watching me walk across the lawn with feed and water accompanied by the dancing dog.
So it's been kind of a game changer.  I stood out there for three days making sure it worked the way it was promised to work.  What I don't like, there is no magic beam to stop the door from closing; it's not toddler proof.  I may walk out to a decapitated chicken someday but for right now it's awesome! 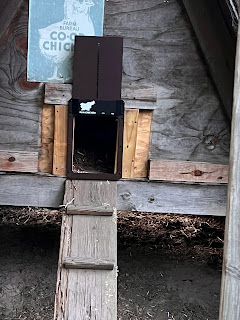 I wish to be left to my illusions of what goes on in the garden. 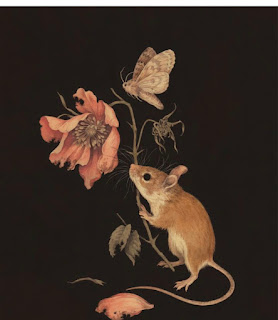 But in reality it's an eat or be eaten kind of world and face it baby bunnies are the McNuggets of the garden world.  They reproduce at an alarming rate but I don't want to see the massacre.  I just don't and yet as I walked out the back door this morning the hundred baby preying mantis had hatched and they were a reminder the détente will end sooner than hoped. 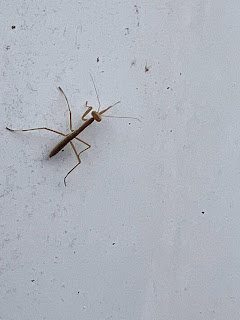 So today I am staying in the kitchen and doing other fun things.  Only the radishes were harmed. 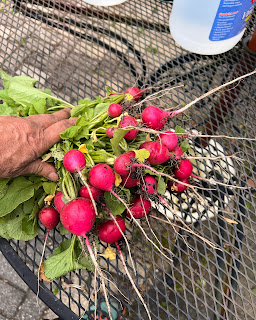 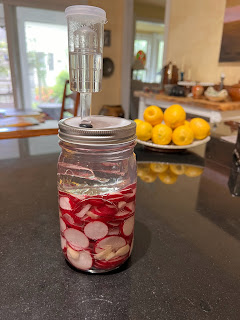